The partnership between beekeepers and citrus farmers in the countryside of São Paulo shows that this coexistence is not only possible but can also generate gains for all parties. An article published in the December issue of the Citricultor magazine, created by the Brazilian Citriculture Defense Fund (Fundecitrus), shows examples of those who produce honey among the groves. The article brings stories of those who have benefited in practice with this model. For those who produce honey, there are significant gains in productivity and product quality. For those who produce orange, bees help pollination. This way, both producers and the environment win. See the full article below.

A partnership that has been going on for more than 20 years at the São Judas Tadeu orange farm, in Boa Esperança do Sul (São Paulo), shows that citriculture and beekeeping can live in harmony and have a profitable union. According to the farm manager, Mr. José Maria Gasolla, the cooperation with the beekeeper Mr. Alberto Luis da Silva happened at random. “We let him put the beehives to help him. Then we realized the advantages caused by the increase of pollination that helps in the development of the fruits”, he says. The beehives are placed in four points of the farm, with 100 hives in each one. In 2016, the average production was 50 kilos of honey per hive.

This year was great, we were able to sell for a better price. Since the farm is irrigated, it helped the bloom a lot and, of course, the bees’ activity”, says Mr. Silva. All honey is exported. The beekeeper removes two types, the wild one, which is produced in eucalyptus, vines and urban areas, and the one from the orange blossom. The slow crystallization and the lighter color are the orange blossom honey differential, that pleases buyers.

After chemical analyzes proved the purity of the honey, the demand for the product has grow again. The secret to the success of the partnership, pointed out by the citrus grower and the beekeepers’ BEST PRACTICES, is the dialogue and the use of best practices on both sides. “We have to talk, to agree on everything. This makes our partnership 100%”, says Mr. Gasolla.

In the property, selective insecticides to the bees are applied, which means that they don’t bring risk to the species. “When they are spraying and I come here, and I see a lot of bees working in the grove, it’s exciting because it’s a very good sign”, says the honey producer.

Mr. Alberto also takes precautions mainly thinking about reducing the risk of accidents. He chooses the time with less workers in the grove to work with the bees, and when he has a large amount of insects, he uses the gate that does not go through the main building to avoid the presence of animals and children.

A third essential face of this partnership is the property manager, Mr. Donizete Aparecido de Oliveira, who is in constant contact with the beekeeper and knows the location of all beehives. “He also assists with the beehives’ collection and transportation to the apiary”, says Mr. Gasolla.

The location of the apiary, around 150 meters from the grove and 200 meters from a pond, was chosen strategically to cooperate with both cultures. “We know that the tractor’s noise, for example, annoys the bees and makes it difficult to produce honey, so we took care not to go with it near the apiary”, says the farm manager. “The bees have to stay in a quiet place to be able to work.”

“The proximity to the water also helps because it is an essential item for the honey production”, explains Mr. Silva. According to Mr. Gasolla, it’s not possible to quantify the benefits of the partnership for the citriculture, but it’s clear that the bees’ activity in the groves provide an increase in productivity, fruit size and juice yield due to increased pollination. “If the farm and the citrus grower are in harmony, there are no problems and everybody gets happy,” he says.

To read the whole issue of the magazine, in Portuguese, check the link: http://www.fundecitrus.com.br/comunicacao/revista/revista-citricultor—edicao-39/47 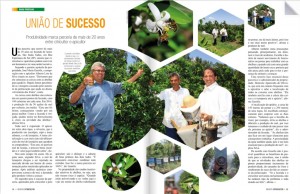