WITH “PES” UP AND RUNNING 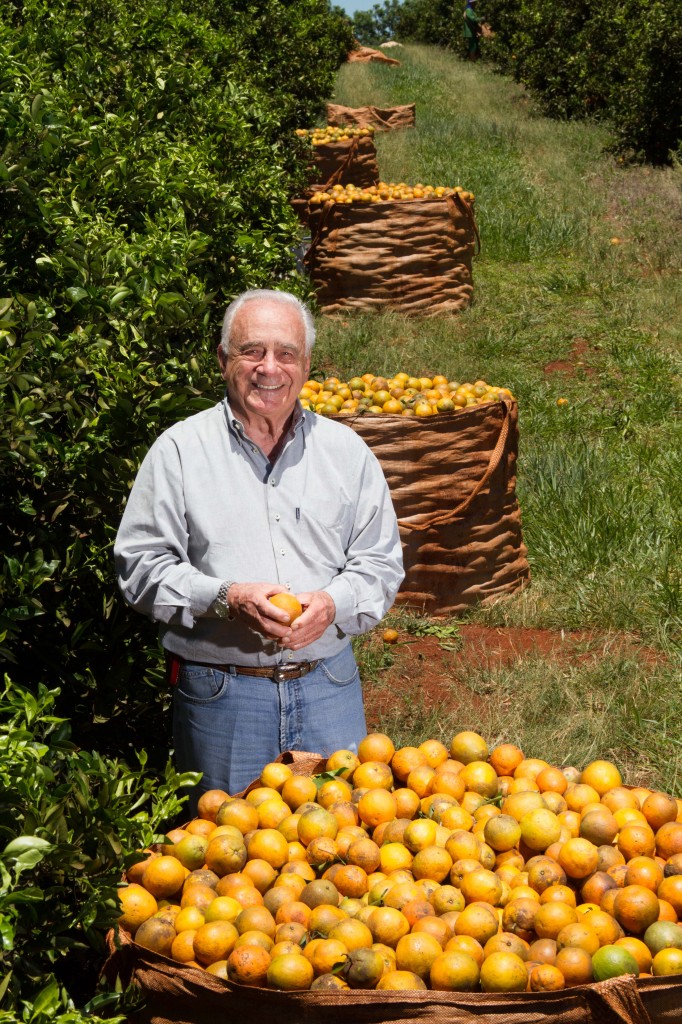 Citrus farmer, Lourival Mônaco, the president of Fundecitrus, has 350,000 trees on his farm. Like all the other citrus growers he did not know exactly how many trees went to make up the citrus-growing area in São Paulo and the Triângulo Mineiro [Minas Triangle], the region that supplies fruit for the Brazilian orange juice industry, which is responsible for more than 80% of the world’s exports of the product.

Fundecitrus, one of the most important institutions in the Brazilian citrus sector, is word-renowned and funded by Brazilian citrus-growers and processors. In recent years it has carried out extremely relevant research and development work for the activity in connection with the control of diseases and pests, as well as relating to stewardship of the citrus groves. Furthermore, it has always been engaged in providing information and training for citrus growers, and has recently increased its scope of activities by starting the PES – crop estimate project (Projeto de Estimativa de Safra, in Portuguese).

This is an innovative project based on high-resolution satellite images and involving over 50 professionals from different work areas, the purpose being to renew the citrus belt census under strict scientific standards, with subsequent crop estimates and updates. It also involves the collaboration of farmes, who allow the technicians to enter their properties. 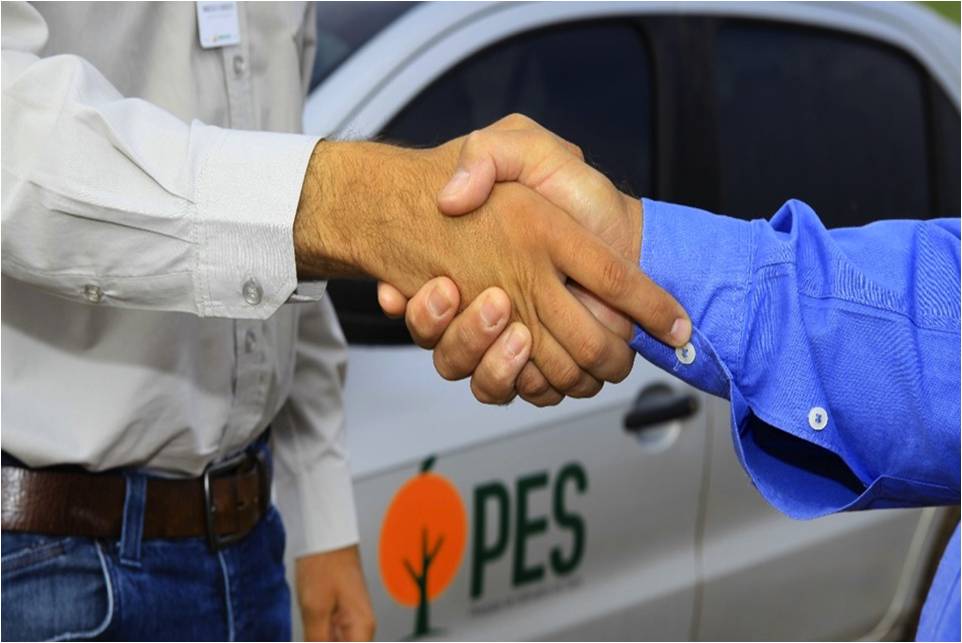 This task will make use of state-of-the-art tools and methodologies for crop estimates and add significant benefits to the whole of the production chain. In recent years Brazilian orange crop estimates have been disclosed by a number of public and private agents, which have used a variety of methodologies that have often displayed substantially different results and given rise to market speculation that affects all stakeholders.

Under this project, orange juice processing industries associated with CitrusBR (Cutrale, Citrosuco and Louis Dreyfus) have transferred precious information to Fundecitrus, not only on census and crop estimate best practices, but chiefly background and historical data, enabling a holistic view of the entire citrus chain.

The project began with the acquisition of high-resolution satellite photos covering a 152 square kilometer area. These images reflect the plots of land to be covered by teams in the field provided with GPS, computers and other tools for gathering data and checking information. The information collected is then reviewed by analysts and audited by means of complex procedures to create a varied array of important data such as: the number of trees in the citrus belt, area in hectares, orange varieties and percentage of non-productive trees, among others. With these data and the stripping process, consisting in picking the fruit from thousands of trees from the entire citrus belt over a certain period in order to obtain average productivity, it is possible to arrive at very precise figures in crop estimates, with a 95% confidence interval.

Over the last two years there has been a lot of movement in the sector, with the entry and exit of players to and from the market, which has brought uncertainty to producers and all the links in the value chain. For this reason May 19, 2015 was an historic day for the sector: on this date the tree inventory for the citrus belt in Sao Paulo and the Triângulo Mineiro was published, as was the first estimate of the crop, as divulged by Fundecitrus.

Data from the report allow us to understand better the São Paulo and Triângulo Mineiro citrus belt: 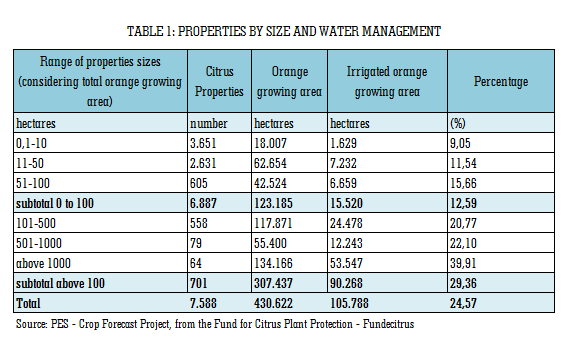 Table 1, for example, which shows the stratification of property by size and water management, contains a surprising fact. While 40% of the properties over 1000 hectares have an irrigation system, just 12.5% of the properties that have fewer than 100 hectares use this technology. The stratification shows that this technological resource has been mainly used on large properties and this flashes up a warning light; management plans and public policy incentives are needed for disseminating this particular type of management.

In Table 2, on the other hand, which shows the number of producers and ranks them by number of trees, we can see that there is a concentration tendency in the citrus belt. 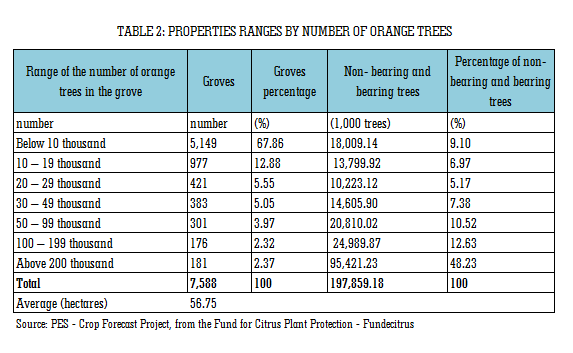 When we cross-check the data about citrus groves under formation with the municipalities and also evaluate the average density of these same groves, we notice a huge gap between the different technologies that are going to be coexisting in a citrus-growing sector that is becoming more and more competitive. Just to give one example of this, while the groves under formation in the municipality of Avaré have an average density of 711 plants per hectare, those groves planted in Votuporanga record an average of 497 plants per hectare. This means a difference in density in new plantings of the order of 43%, which certainly means that the highly dense groves of Avaré have a productivity that is exponentially greater and, therefore, a production cost that is significantly smaller than their peer groves planted in Votuporanga.

The result of this difference may be noticed in a large gain in productivity in the former municipality relative to the latter, and this in a business in which productivity is increasingly important for diluting production costs. When we observe the average age of the adult groves we can see that the traditional regions, where the youngest groves are found, stand out.

In using this particular age band as a cut-off point, we are amazed to see that 27,437 hectares, or 6.8% of the 403,492 hectares in production are formed precisely by groves that are over 22 years old. This significant portion of groves that are extremely old and with extremely low productivity will certainly find it difficult to produce oranges at competitive costs, which puts at risk the sustainability of the business for the producer.

The PES project undoubtedly brought us new tools so producers can think about their business and try and foresee possible scenarios. Since Fundecitrus disclosed its work, the citrus growers have been doing their sums and taking very seriously the details found in the PES project. This behavior is due to the credibility the project generated, mainly because of the transparency of its actions.

The president, employees and board of Fundecitrus will make every effort for the project to be introduced with the highest degree of transparency and seriousness, thus bringing benefits not only to Brazilian producers, but to the whole of the value chain, to the extent that it makes everything more transparent.