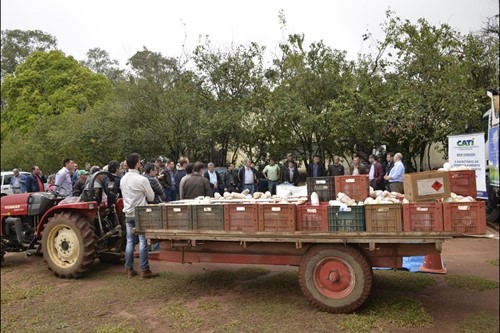 More than 420 tons of obsolete agrochemicals stored on rural properties in São Paulo will be incinerated by the Secretariat for Agriculture and Supply of the State of São Paulo. The action is part of the partnership between the Government of the State of São Paulo and the National Institute for Processing Empty Containers (InpEV, in Portuguese), a nonprofit organization that represents more than 100 companies and nine representative entities of the industry, distributors and farmers, which acts as the intelligence center of the Campo Limpo System in the activities of disposal of post-consumption agrochemical containers and promotes awareness and environmental education initiatives on the subject.

This partnership establishes that the Secretariat for Agriculture, through its Agricultural Defense Coordination (CDA, in Portuguese), is responsible for the inspection and incineration of the products, and the Institute for storage and transportation. The action also has the support of Environmental Company of the State of São Paulo (Cetesb, in Portuguese), an agency of the Environment Department, responsible for issuing all necessary licenses for the process.

InpEV will carry out the logistics, removing the obsolete products from more than 250 rural properties and taking them to the city of Mauá, in the metropolitan area of São Paulo, where the burning will take place. “Our expectation is to finish the burning process in three months. This is an action established by Governor Geraldo Alckmin to ensure the healthiness of foods, keeping this waste from reaching our production, and to preserve the environment, considering it is a chemical compound harmful to nature”, said the Secretary for Agriculture of São Paulo, Mr. Arnaldo Jardim.

According to the deputy coordinator of CDA, Mr. Mário Sérgio Tomazela, the Coordination sent to the Legislative Assembly a bill to regulate the inspection by the Agricultural Defense completely focused on the agricultural issue. “In addition, we have prepared the Animal and Plant Protection Management System (Gedave, in Portuguese) to control agrochemicals from the industry, through the distributor, reseller, and producer, and the return of the empty containers to the Receiving Units”, he said.

“With the regulation of Gedave, we can carry out a detailed monitoring of each gram of agrochemicals sold in São Paulo State, preventing trade and use of illegal products that can cause harm to the environment and to those who apply them”, added the Secretary for Agriculture, Mr. Arnaldo Jardim.

The control of residues and regulation of the use of agrochemicals will be done in partnership with the Biological Institute, an agency linked to the Secretariat for Agriculture of São Paulo. “We inspect the harvest of products such as tomatoes, bell peppers, strawberries, lettuces, guavas, carrots, and cucumbers, which will undergo routine monitoring and waste control. We are also committed to review and update the law on conservation, and inspecting the agricultural soil and issues related to integrated pest management.

The joint action of several entities and government agencies is one of the pillars of the Campo Limpo System, which is based on the principle of shared responsibilities among all the links in the production chain (farmers, manufacturers and distribution channels, with the support of the public authorities) to carry out the reverse logistics for the empty agrochemical containers. Brazil is a world reference in the environmentally correct destination of the material, sending 94% of primary plastic containers for recycling or incineration.

You can get to know more about the actions of the Campo Limpo program in the link below, in Portuguese